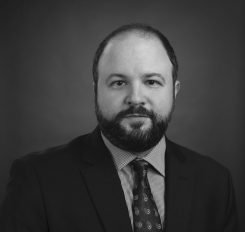 Joseph is Of Counsel to Littman Krooks. He is the Chair of Helbraun & Levey’s Licensing Division and is in charge of all New York State Liquor Authority and other licensing matters for his firm. Joseph’s primary area of expertise is New York State Alcohol Beverage Control Law and he has extensive experience practicing before the New York State Liquor Authority with regard to various licensing and disciplinary matters. He regularly attends local Community Board meetings on behalf of his clients and has developed a stellar reputation as a well-prepared and knowledgeable advocate. Joseph also handles Sidewalk Café Permit and Food Establishment Permit applications.

Previously, Joseph owned and operated his own management company in the area of Combat Sports.  He negotiated athlete contracts, sponsorship and licensing agreements, and managed professional athletes in the areas of mixed martial arts and boxing.